Electronic Entertainment Expo: One of the most important trade fairs for game developers and publishers

The Electronic Entertainment Expo (E3 for short), held annually in Los Angeles, is considered one of the most important dates for the video and computer games industry. The event is organised by the Entertainment Software Association and, in addition to what is always a well-attended visitors’ trade fair, also includes a conference that attracts a great deal of attention among experts and at which the latest new developments are presented to trade visitors and press representatives.

For E3 2019, our client – a leading developer of games and consoles – had put the three-day live World Cup broadcast of its popular e-games on the agenda in addition to the livestreaming of the product presentations. In line with the young and highly tech-savvy target group, transmission to a wide variety of channels and end devices was, of course, also desired: social media platforms such as Youtube or Twitch, as well as a wide range of multiscreen devices such as connected TVs, tablets, smartphones and set-top boxes.

In order to be able to guarantee live streaming to a wide variety of platforms such as company websites, social media channels and press channels, a solution was needed that would provide the most stable signal transmission path possible from the event location to one of our encoding platforms.

In the past, RTMP Ingest was often used as a video server – a proven and frequently used solution, but as a proprietary network protocol, it has the disadvantage of not having any error correction. This lack of error correction often led to disruptions and interruptions in the ingest, which then became particularly noticeable on social media channels through a jerky or frozen video signal transmission. This was an unacceptable scenario for gaming world championships and product launches.

Stabilisation of the signal transmission

What was needed was a solution that met the high demands of the different live streaming channels and was able to stabilise the transmission path through error correction by means of a suitable streaming protocol. In order to guarantee this signal path between on-site video production at the event location, the encoding solution and the broadcasting to the streaming end points, a signal chain is recommended that takes uniform paths for all participants.

Such scenarios are particularly challenging when it comes to accessing heterogeneous system components, and are, therefore, often a question of authorisation management. This is where the desire for a proven Entitlement solution came into play. Entitlement optimises the finely gradable assignment of rights to participating service providers, optimises their communication flow with each other and thus ensures the seamless interlocking of the components: 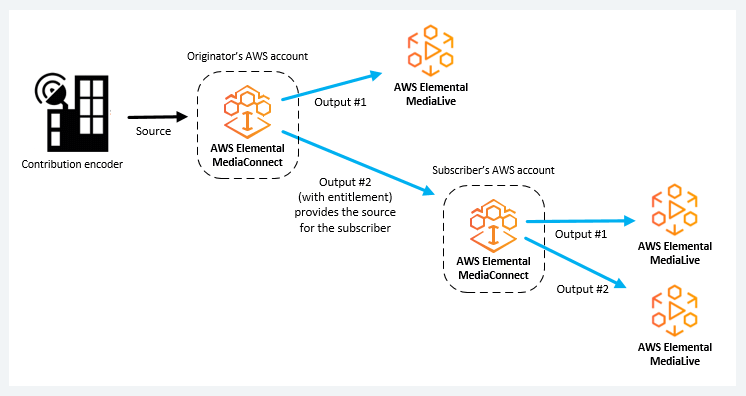 Entitlement and transcoding from a single source

In order to be able to use Entitlement in the desired form, we agreed on test runs with the video production on-site, during which the question of the appropriate transcoding solution arose: A video processing infrastructure for broadcasting live videos was required that could provide high-performance real-time encoding to match Entitlement and could handle the encoding according to the high number of different end devices. The obvious solution: the transcoding should also be done via AWS, in order to guarantee a closed chain from the service provider. A popular and well-known solution for 24x7 channels with high availability is AWS Elemental MediaLive – cloud-based architecture, various features for extended broadcasting functions and a usage-based pricing model speak for themselves

Another requirement was the integration of emergency solutions, in order to be prepared for possible failure scenarios. The MediaConnect architecture was, therefore, run via 2 separate AWS data centres during the entire event – a classic geo-redundancy solution, in our case these were USA West, Oregon and USA East, Virginia. The transcoding was carried out according to the redundancy connection via 5 channels in each case, in order to be able to provide the large number of required encodings quickly. Finally, on the endpoint side, all available levels were used – a classic use case here was, for example, live streaming via YouTube and the use of the backup solutions available there. 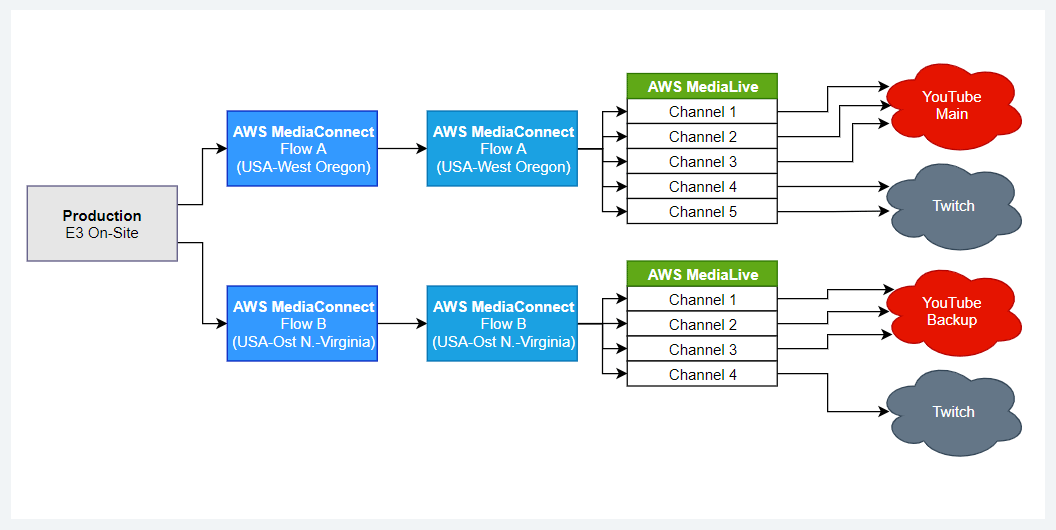 Schematic representation of the final setup